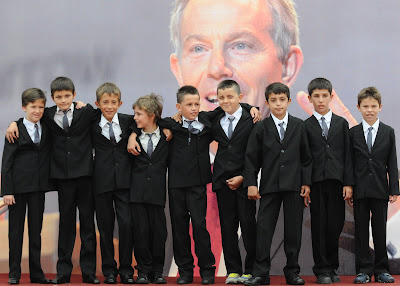 Old tradition of renewing family members names after they pass away at Kosovo Albanians has been amended since the end of Balkan wars at the end of nineties, when Kosovo Albanians have been victims of them, too.
This amendment was noticeable right after Kosovo war when some Albanian parents did name their children on behalf of appreciations after people that were and still are alive.
On this picture you can see nine Kosovo Albanians children that are named after Great Britain-Prime Minister at that time Tony Blair, who is considered a war hero in Kosovo for his help dedicated to Kosovo freedom.
All these children taking a picture next to the Prime Minister’s photo Tony Blair are born in 1999, time when their country Kosovo got the freedom.
All these children have something in common. Their first name “Tonyblair”, that was given to them after the first and last name of Prime Minister “Tony Blair”.


(Photo by Kushtim Ternave)
Posted by Aban Muja at 9:12 AM