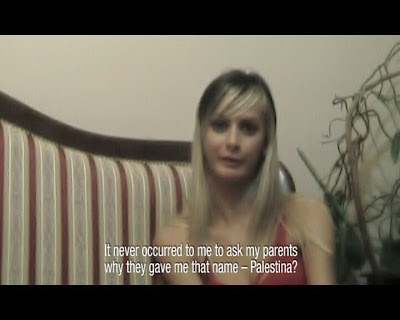 Palestina, is an Albanian girl. Her name may sound strange and unusual, but her name is Palestina. The name has been thrilling to her since she understood the real history of it. However, she feels proud of her name and the story of how she got that name. Palestina herself tells this history on video. Her mother, at the time when she was expecting a baby, was stunned by a tragedy taking place in Palestine. Israeli soldiers killed a young Palestinian in front of his girlfriend. Sad because of the cruel killing of her lover, young Palestinian girl,  got into her car, filled it with explosives and clashed along with this car-bomb into an Israeli soldier convoy, killing as many as 20.   The event took place in 1982, weeks before  a Kosovo girl, later named after “Palestine”, was born. Her mother, stunned with the tragic news comming from Palestine, decided immediately that if the baby she was going to give birth is a girl, she would be named Palestine. Her husband and the entire family were severely against this unusual name, but she was set and did not defer the pressure. On the video, Palestina herself tells how she understood the reality of her name’s history: ”Through this video I wanted to present the importance of interpretation and influence of the news upon global society, including news dealing with tragic and horrifying events that spark extreme reactions as even today it is not that easy to distinguish the boundary between heroism and madness”.

http://www.youtube.com/watch?v=xbdrIbZ_vLc
Posted by Aban Muja at 8:36 AM