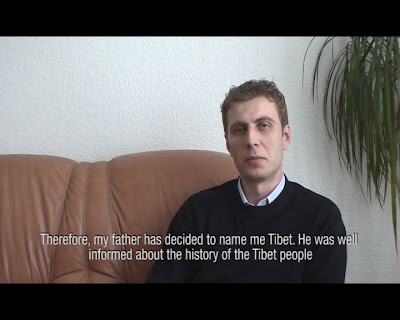 It’s a video about a Kosovar Albanian man, who lives in Switzerland. In fact the story is about his name. Tibet is an unusual name. Apart from having a strange name, the story how of he got his name makes this more interesting, strange and unusual. We, as a society, are used to hear names, which have some kind of attachment to the history of our own country, newborn children named after the war heroes or heroines. However, I am amazed when I hear names that in fact break the usual tradition of naming the newborn children. This story I am about to present has no relation to the history of the country the character is coming from. His name does not have any relation with the conflict or the history of the conflict itself it is an act of solidarity. Tibet was the second child in the family. He was the newborn male child, which for his family was the peak of happiness, and is the meaning of the Tibet as well. Apart from showing their solidarity with the situation in Tibet, which in many ways shared the same aims and ideals as Kosovo (home country of Tibet), liberty and fighting for human rights, his family had another meaning of this name in mind. Tibet – the worlds highest region. Through this video I wanted also to present the importance of interpretation and influence of the news on global society.

http://www.youtube.com/watch?v=wfQwWhHU8W0
Posted by Aban Muja at 8:39 AM