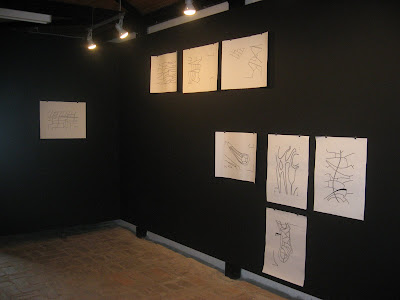 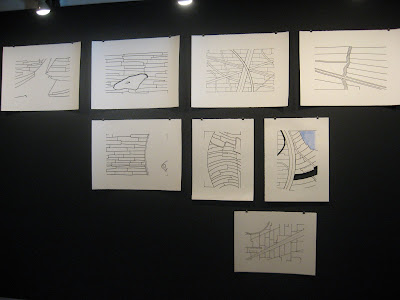 “window seat”  20 drawings 2007
Seated near the window, Alban Muja was looking at the crossings of strange lines, sometimes straight, while sometimes fractured, although like painted by a hand of a skittish child. A thick line in horizon was restraining the sea from the land and, at the same time, the light from the darkness. It looked like the race among water and earth, aiming to occupy as much space possible. Sometimes the earth thrust into the sea or created a row of islands, while sometimes the sea thrust far inland, were it often converged with the curved lines of rivers which were flowing from the edge of the utterly dark horizon. Alban had nearby a black marker pen and few paper sheets; hence he began making sketches of those compositions. Later, when the plane was flying above urban areas, he noticed in front of him a lot of geometrical shapes of an urban world, which were, all separately, aiming to be adjusted, although altogether they’ve created an abstract composition.

“Occasionally I was seeing forms of expressive abstraction, while occasionally those of a geometrical abstraction”.  In both cases, the flurries of creation were slamming – those of Nature (or God, if you prefer), or those of Men.“Thereupon, during every other journey from the East to the West Coast, or vice versa, I was always looking to get a seat near the window – ‘Windows Seat’. And, I continue to fill my sheets with drawings of America, from above”.